The Green Spotlight blogs allow students, faculty, staff, and friends of Appalachian a chance to express, in their own words, their personal connection to sustainability.

On March 28th 2019, the Renewable Energy Initiative (REI) held its annual Spring Forum. The event occurred from 5:00 p.m. - 8:00 p.m., giving attendees the opportunity to learn about REI, visit other sustainable on-campus clubs, listen to live music, enjoy a free meal, and network with sustainable-minded individuals.The sun shined through the wall-high windows of the Student Union Solarium as REI committee members and other speakers took stage and spoke to the attendees. “We are here because sustainability matters,” said Jonathan Williford, Project Management Co-Chair.

Because the event was open to the public, committee members encouraged attendees to join REI, saying that everyone has the potential to contribute to the student run organization.

“If you are.. say.. an advertising or business major, we really encourage you to get involved,” said Andrew Argudo, Public Relations Co-Chair of REI. “You’d be surprised how many different skill sets each renewable energy project we put up on campus takes.”

Anisha Sharma, a Sustainability Ambassador for the Office of Sustainability spoke on behalf of the Student Government Association. With a smile on her face, Sharma announced that the Climate Neutrality bill, which was created by, and voted on by students, was passed March 13th 2019. The Climate Neutrality bills focus is to reduce Appalachian State University’s offset of greenhouse gasses and carbon emissions. “Students do want to aim for Climate Neutrality by 2025 rather than 2050,” Sharma said. “We, as students, do have the sense of urgency and we are really excited to work with REI to put these plans into actions.”

Dr. Lee Ball, Chief Sustainability Officer at the Office of Sustainability, and a former faculty advisor for REI, spoke about the importance of REI. “REI is a very special organization. Most campus’ don’t have an example of an Renewable Energy Initiative on campus, especially one that is this engaged with faculty, with staff, and the community.”

Ball mentioned it was a sunny day, and drew attention to ROSE, the solar vehicle teams solar car, which was out on Sanford Mall in honor of the Spring Forum. “It really is no simple feat to bring the car out here. Because they are working on the car everyday, and when they take it out to show her off it means they aren’t working on it which is a bit of a sacrifice.” Ball added that he thought it was important for the car to be out on Sanford Mall occasionally.

Multiple on-campus environmental clubs attended the Spring Forum and set up tables to promote their organization. These clubs included REI, the Office of Sustainability, SDSA, BRC, App Builds a Home and Nexus.

The informational table for the Office of Sustainability consisted of three tables, which displayed various assets of the Office. One table had a raffle where attendees were invited to name the Office’s two solar powered golf carts. The winner of the raffle will receive a reusable Sustain Appalachian bag, a Sustain Appalachian T-shirt, a set of reusable, transportable bamboo eating utensils and a packet of black-eyed Susan seeds. Freebies were scattered among the Office’s tables. attendees, as the table was decorated with stickers, informational brochures, and bottle opener keychain, all with the Office of Sustainability’s name.

One of the tables promoted the Free Store, Food Pantry, and volunteering opportunities. Another table contained free bread samples, to inform attendees that Stick Boy bread is donated to the Office every Tuesday and Thursday. This table also showed sustainable crafts that were made from items in the Free Store.

The Office also provided an educational interactive activity, where attendees could ride on a stand still bike and generate electricity. As the participants peddled on the bike, a light bulb would light up, demonstrating how energy is created.

Much like the comforting warmth of a sunny spring day, solar powered vehicles, wind turbines, or a bike that can light up a bulb, reminds us of the importance of energy. REI reminds Appalachian State of that magic with every project they complete. 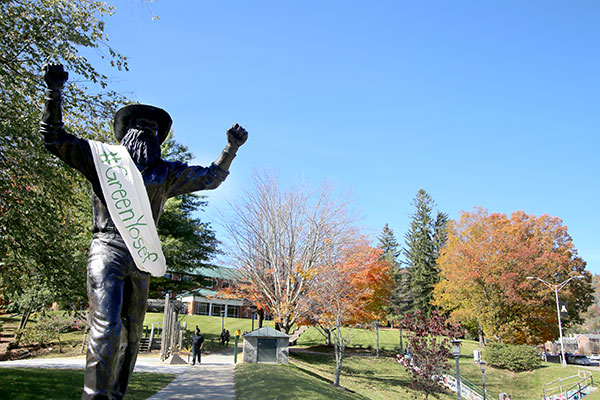 To view sustainability related news on campus go to sustain.appstate.edu/news.